From USI-RPG
(Redirected from Species:Orrin)
Jump to navigation Jump to search

The Orrin are humanoid with general Terran appearances. They tend to have fairer complexions. The common Orrin have light brown, blond, or red (in all its variations) of hair. Eye color is commonly green, hazel and blue.

The Orrin are lead by the Divine Orrin Triumvirate and have a hierarchical nobility class system which define power, wealth, and freedoms. Family Clans, or Septs, are directly tied into this system. 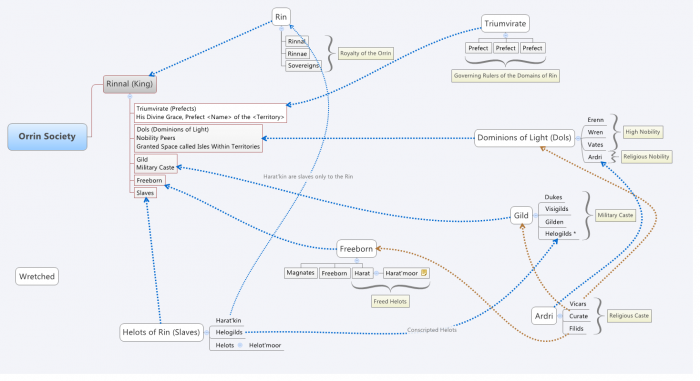 The Rinnal is supported by his Three Prefects, which make up the Divine Triumvirate of Orrin, where the real government of the people is held. Among the most notable and notorious Prefects, is Prefect Sprague. Prefects are in charge of their domain. There are only Three prefects and only three domains. Because the Prefect are the head of the Orrin Religion, they are considered to be more powerful than the Rinnal himself.

Domain Peers (Dominions of Light, or Dols) are nobility who are both Government and Religious officials (Although some are more or less active in one or the other.) These peers of the Domain oversee operations in solarsystems within their Isle, which are sections of space granted to them by the Rinnal and the Prefects. Higher ranked peers indicate power, wealth, and freedoms, and higher ranked peers are more likely to have more, bigger, Isles, as well as be granted permission for conquests, and be granted newly established isles and systems. Higher ranks require a certain level of psionic abilities, as challenges of authority through conquests or duels are legal. Domain peers are the Orrin military Forces with varying degree of power and freedoms.

List of Domain Peer ranks in order from highest to lowest.

Domain peers are called as Rank <Last Name> of Isle <Isle Name>, and are referred to as Lords. It is common for the higher four ranks to forgo most religious pursuit, leaving the Druid peers the most religious of the peers, the prefect aside.

Below the Domain Peers, are the Visigilds, who are nobility who live off of taxes or rent, but otherwise have no government or religious duty. Visigilds are often the family of Domain peers and own Lucrative or strategic planets, but not all visigilds are family. Visigilds are subject to their systems Domain peer, but often have political power as they are more connected with the Orrin population than their Domain Peers. Visigilds do not create, establish or conquer planets, they only own or manage them, collect taxes and rent. The Visigild nobility rank is also given to direct family members of Domain peers who will not inherit the nobility. This rank corresponds as the counterpart in Domain Peer rank.

Next we have the Freeborn. The freeborn are not nobility and have little social status other than being free individuals. The freeborn make up the general populace of the Orrin. While the freeborn do not have official titles which officially put them into a nobility order, they do have two name modifications which more or less put them into a lower or middle class category. If a Freeborn were to be nobilized through any means, this name modification is dropped entirely, although in practice hereditary Nobles often still refer to the nobilized with their freeborn prefix.

The middle class of freeborn place a Mac before the surname as in MacIntire or MacBrian.

The lower class freeborn's name place an O' before the surname as in O'Brian, or O'Mallory.

Last we have the slaves of Orrin or helots. The slavery system have many degrees and reasons. Slaves are not given a title for terms of respect, and most are called by the Orrin term, helot. Families who are enslaved as a whole are called Helot'moor. Helot masters, or Trainers, are called Helistir; this is not a title of their social nobility (or lack thereof) but it is a title of Honor as they are considered highly among all Orrin.

The primary and foremost reason are debt repaying. Elevation the status of an individual or a family. By direct domination and enslaving another person or family, one can elevate their status. Prisoners are considered slaves and are put into slavery to pay back their crimes. Soldiers are often dominated conscripts who fight for the military or nobility household. Nobility Soldiers are generally Dominated slaves.

The elite soldiers of the Orrin Triumph (The Military of the Orrin under the command of the Rinnal, also known as the Triumph of the Rinnal or the Rinnals Triumph) are called Harat'kin, who are soldiers that are trained and controled in similar manners as Helots to make them fearsome and effective soldiers.

One recently discovered information about Psionics are its side effects and its by-products. Psionics in of itself has one known side effect, a by-product called Duais, or PBP (Psionic By-Product.) What it is is a combination of some basic chemicals and some interesting electron attributes which exhibit some quantum irregularities which it then causes some interesting side effects to the Psion. PBP is created through the direct use of Psionic activity. It is created through the quantum connection of the Aureal plane around the neurons of a Psions brain. This is then bussed to the endocrine system of the being, where it is then distributed to the rest of the body via the Blood Stream.

PBP then causes two known side effects. The first is a natural high, or euphoric feeling. This feeling is extremely intense. The other is different and varies depending on the ability used and the individual who is using the ability. It is observed that the second effect, which takes place shortly after the first is always a negative or degenerative. Common symptoms range from hallucinations, memory loss, lose of senses (sight, hearing, touch, taste, psionic, supernatural ), sensitivity of certain senses (hearing, touch, empathy related psionic abilities with no control) physical impairment such as paralysis, loss of physical control, etc.

Duais, or PBP can be extracted from a psion both prior to excretion into the blood and afterwards. The Orrin have historically extracted the PBP for Religious reasons, claiming to give back to the gods for the Psionic abilities that they grant to them, known as Mind Gifts. Extractions are typically done by Religious leaders when it is offered and are shown to increase their devotion to the faiths much in the same manner that Extractions help slaves transition themselves to being a Helot. The relationship is unclear, but many believe it exists.

It has been recently found that PBP can also be collected from psions for different reasons. The first is for illegal drug use. PBP is known to act like a Narcotic, it is often harder to detect its illegal use. It is, however, extremely dangerous due to the negative side effects that PBP causes after the high. The High is usually in small durations but more intense than traditional narcotics. The second would be for use in Biological/Chemical Warfare. While there have been no known successful attempts in using PBP as one, it is likely to see this used in the near future.

Orrin are infamous for their psionic skills in Mind Domination, Telepathy, manipulation. Despite having great skills in telepathy, the Orrin prefer to communicate verbally while in crowds, considering the Telepathic nature of communication to be private. Because their culture has a wide diversity of skills and abilities with these psionic disciplines, they consider it also rude for social gatherings. The offensive skills of Mind Domination and its related skills, are even rare among the Orrin with a very low percentage of the population having the skills to practice them efficiently. Because of the inherent skill that the Orrin possess for these skill however, it is noted that they naturally resistant to the discipline and have a high capacity for mental shields.

Psionic domination is the common form of punishment and rehabilitation. It is most commonly seen on helots who have been taken due to Clan political transitions (Rivalry, Wars, uprising, and overthrowing), as well as individuals who refuse to indenture themselves as resolution to a dispute. Duais extraction is heavily used in these processes as the Orrin are known to be resistant to mind affecting abilities.