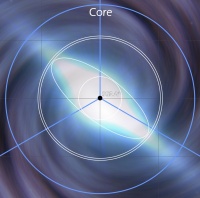 The galactic core, scientifically known as the Bulge, is located as the direct center and axis point of the galaxy. Politically, the core has been defined nearly perfectly spherically. While the bulge is not a perfect sphere, this makes the political galactic core to include parts and portions of the disks that would otherwise be normally included in a political trisector. Because of this, the core includes many species and factions that would otherwise be in a galactic trisector. The bulge itself is a bar, and is mostly made up of nebula, population type I stars, and clouds.

The bulge nebula features one of the most densely known emission nebula's, with pockets classified as Dark Nebula. Because of the density of Population I stars, the ionization of the bar is very great making observation difficult prior to the development of string based scanners.

The density of stars also products pockets of non-nebulae space which were formed when matter would equalize in the pull of nearby stars. Because the bar nebula contains many types of nebula including Solar and Planetary, there have been some life bearing systems born within these pockets. During the course of the Expletuns Preserver movement, they had setup additional protection to ensure that these life-bearing system would be able to maintain their course, even unnaturally protected their harsh nebula environment.

The Core has been divided into three zones; concentric circles mark these zones around Sgr A*<ref>Sgr A*, pronounced Sagittarius A Star, is the name of the blackhole which provides the center and main gravitational anchor of the galaxy.</ref>.

Also nicknamed "The Burn" by core residents, the inner core is largely made up of the bulge of the galaxy. Featuring mostly uninhabitable areas, the burn home to only a handful of species, most of them are USI/Expletun protected species. Due to the density of the Inner Core, standard travel is not possible, on only specialized ships such as Storm Series from USI are able to navigate without the hazards of the nebula. The inner core is also nearly impossible to scan within, making the most dangerous natural are of the galaxy. This area is considered to be Freespace.

The outer reminding space of the core is where the bulk of the habitants and traveled space exists. Called the Realm by locals, it is exposed to the existing trisectors and is well traveled. This is the only portion of of the core who have small parts of it claimed by a Trisector faction, or by a faction large enough to be noticed by the galactic Super powers. Many races have long standing communities and have existed even longer than many of the older trisector factions, even if not nearly as large.

(Parsec is abbreviated as PC)

Pre-Interstellar Communities: It is estimated that six independent races emerged in the Realm, although the exact origin worlds is a matter of dispute. There is evidence that the narrow bands of electromagnetic wavelengths that did not suffer heavy interference from the Inner Core led to the almost unique situation of these races being either aware of, or in contact with each other prior to any of the races achieving interstellar travel capabilities. The similar environments and early contact led to a sense of community that has remained prevalent throughout the history of the core.

Interstellar History: The cooperation of scientist among the leading Core cultures resulted in the development of short range Interstellar travel capabilities. This same cooperation led to the creation of the Interstellar League, a loose federation of the member cultures. The density of stars in the Core Realm proved a significant hazard to early navigators, and with so few habitable planets scattered among the turbulent core stars, colonization efforts were expensive and risky. In an effort to better support the growing number of fragile colonies, and IL used the budding Interstellar Communication technologies to link member worlds and their associated colonies. The machine intelligence at the center of this interstellar network was specifically designed to ensure the safety and survival of colonies without regard to profit. Within a decade, the financial and physical risks associated with start-up colonies was significantly reduced, and the core cultures began to spread among the stars, often intermingling on these colony worlds.

By the time the Core Cultures encountered sentient life from outside of the Core, they were already a highly enlightened and sophisticated interstellar community.

The Interstellar League remains the most powerful political entity at the Core. The current manifestation of the interstellar communications network is CION (Core Interstellar Operations Network). A minority of worlds have given CION full governmental control over planets and associated colonies. These Cionist represent the oldest and most highly populated worlds in the Realm, and their control over the Interstellar League has been evident for hundreds of years. The majority of worlds elect human governors, with CION being relegated to an advisory position. As a political unit, the human governed worlds are known as the Human Intelligence Movement (HIM).

With CION providing altruistic support of all sentient life throughout the core, for centuries the attainment of wealth within the core has been associated with proving one could offer useful aid to CION supported efforts. Interstellar transportation companies that could service the remote colonies prospered as CION called on them again and again to keep these colonies supplied. Terraforming companies prospered as CION called on them to make colony worlds more habitable. Defense and Security companies profited by providing defense to people effected by war or piracy. CION was both the basis of wealth and economic stability that held the Core together. Furthermore, CIONs ability to work towards very long term goals, something corporations tended to avoid, helped ensure a forecast of long term stability throughout the Realm.

Recently the discovery of Expletun artifacts in a number of uninhabitable Core systems has threatened to disrupt the economic stability of the region. Conflicts over artifact discoveries have escalated into interstellar wars on several occasions, and each incident has been met by CION supported trade blockaids and civilian aid efforts that have tended to polarize the already strained political environment.

Interstellar League (IL) - A federation of highly populated planets that advise on Interstellar matters within the Core, and act as the Core's representation in dealings with sentients outside the Core.

Cionists - A group of worlds that have given the interstellar machine intelligence called CION a great degree of control over all sentients endeavors. Although often criticized as Orwellian societies, it remains true the Cionist communities are the most highly advanced planets in the Core. Cionist have been the most influential party in the Interstellar League for several centuries.

Sentient Intelligence League (SIM) - A collection of communities that oppose yielding control of Sentient endeavors to CION. SIM is the minority party in the IL.

CION Support groups - a collection of families, corporations, and agencies that have dedicated their existence to supporting CION projects. CION support groups include the most wealthy interstellar corporations, universities, hospitals, disaster relief agencies, sentient rights groups, and other groups that have a long standing history of responding to CION's call to action.