Expanded and Extended Physics: Faster than Light Flight and technologies that are based on the same core concepts.

To start to understand some of the expanded and extended physics of USI, its important to first look at what great minds have done today in the 21st century which have laid a groundwork for this, primarily the Anthropic Principle. My own definition is as such:

We observe the universe the way it is, because we are a state here to observe it as it is.

Somewhat cryptic but its fundamental. It explains that the universe is the way it is, and we as humans are able to observe it as such by the very nature that we are able to observe it! Stephen Hawking puts forth the example of a two-dimensional being, how its universe is different than ours even if we happen to literally exist in that same universe. Its very nature prohibits it from naturally comprehending the third axis in which we are traditional three-dimensional beings are able to exist on.

One is that physical space is not limited to three dimensions. In the same respect that our two-dimensional being can’t fathom that third dimension, yet we know there is, we have a harder time fathoming 4th or 5th or more additional physical dimensions. Our universe doesn’t appear to have them, because we are only able to natively (that is without the aid of technology) observe three of them. Now keep in mind that we are currently referring to additional physical dimensions. Not like dimensions that produce parallel worlds or the abstract dimension of time (often called the fourth-dimension), which has its own rules and is effected by a whole other set of rules.

Another is that Physical space is inherited, and hierarchal. This means as you increase your physical space dimensions, any descended dimension inherits its ancestor’s properties. Starting with our first known physical space, is the 1 Dimension, X. Additionally, add in the physical dimension of Y, and it also has properties of Y. Z contains all three. Now as to which one is really the first, second, or third is irrelevant as they themselves could all be considered a First dimension as separately they all share the same property of a linear flat physical space.

This means that it’s possible for objects to exist on limited separate physical space dimensions, but as they grow in complexity, they begin to become similar and share attributes. For example, the surface of the floor is 2-dimensional, and consists only of Length (x) and width (y). Any number of such 2d surfaces may occupy a particular 3d volume of space, some of which intersect (the floor and walls) and some of which do not (floor and ceiling). All of these surfaces are 2D, and physically share identical spatial properties (only an x and y dimension), but aside from this similarity, they might be strikingly different.

There are many string theories in existence today. While I will confess that I don’t understand 90% of what is there, it was enough for me to formulate my own ideas in conjunction with my views on physical Space dimensions. As you may or may not have realized, there are in fact more than 3 physical space dimensions. The actual number could be infinite, or it could be much more simple such as 9, 12 or 15, as is often theorized *usually considered a number +1 to account for the abstract dimension of time, which may not even be a real dimension.

We do not natively observe strings due to the fact that while a complex object, they are not arranged in the same universe linear physical space dimension hierarchy as we do. They do however, exist on at least 2 dimension which leads us to be able to observe them through technology, if even if only on a passive observation level in the 21st century.

So what are strings? My theory is that they are the mass of the physical space universe as a whole (meaning all dimensions considered one). Just as it may be considered that mass is an actual dimension, making us more than just three-dimension creatures, physical space must have structure of some form. Gravity theories even provide direct mechanisms in which this physical structure is modified. This is why everything has a string attached to it, include physical space itself. Physical space in concept seams like an untouchable object, but through strings we find that we are able to.

Technology of the Future

These concepts discussed are the core basis of major technology required for the future. Faster than Light Flight, Instantaneous Communication, short range and long range spatial travel without the use of Intergalactic vessels are just some of the puzzled solved with careful observance of applications using these concepts.

Faster than light flight is impossible as defined by Einstein’s famous equation E=MC^2, where our mass begins to become heavier as our velocity increases, requiring an exponential increase of energy the faster we go. This presents a problem with intergalactic travel being effective and exploring the universe even viable. With the ability to manipulate strings, and consequently manipulate the very physical structure of space just as gravity is able to do, we can reform space, fold it, and compress it to where we can cross large expanses of space as if it were really small distances and get from Point A to point B in a fraction of the time. Traveling through these space deformations would still require the use of normal sub-light speed mechanisms.

Observing a ship traveling in compressed space across folds would be like observing a stone being skipped across water, and watching it from the viewpoint of a fish.

Because of this, it’s also not necessary for each individual ship to generate space folds to create a spatial compression. A single ship may create the effect, and ships may follow behind or aside up to a maximum distance which would be based on the ships drive ability. For example, a larger ship could create a larger wake and ships would be more easily able to follow than a smaller ship.

Space folds could potentially interfere with each other while two independent ships travel that happen to intersect, but due to the nature of spatial folding and compression, they likely would literally fold around each other. But there is a possibility for a problem of exact intersection does happen to occur. This would require the pinnacle of folded space to be shared between both ships as that would be a common compression allowing both to possibly crash into each other.

This same method can be used to dock two ships that come to share a common compression although it would still require the usual sub-light procedure in order to conduct the docking maneuver. 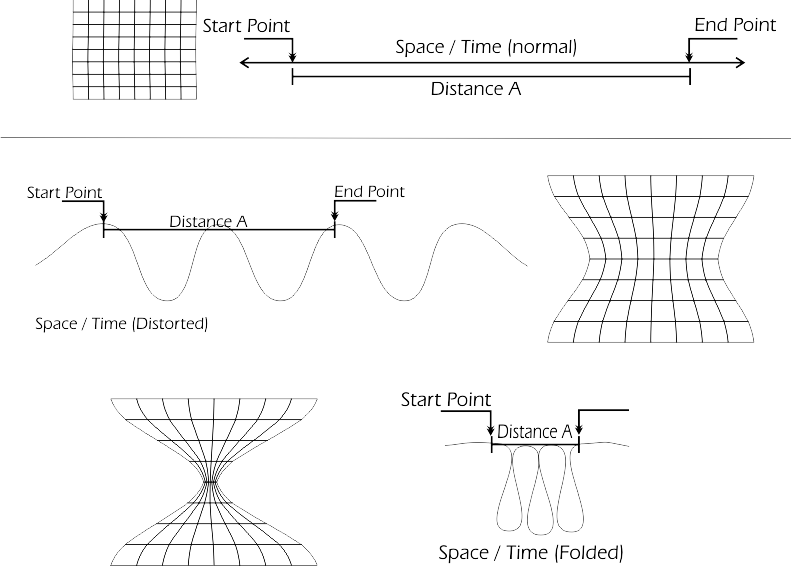 Space folds are created and a compression is created at a very high rate. Ships do not have the power to take a single string and compress so much space that it would be equivalent to traveling across the galaxy in a single jump. Successful spatial compression is done with a ship manipulating a series of strings, releasing and manipulating new ones as it travels across space, kind of like Tarzan swinging through the trees.

A ship may not also manipulate too many strings at a time as this would cause physical space tension and likely cause a stress on the FTL Drive, resulting in it being destroyed. In most cases, only enough strings to create successful spatial compression is used as it uses more energy to manipulate more strings, reducing the efficiency of a ships FTL drive unnecessarily.

Ships FTL Drives are also only able to fold and achieve spatial compression in a single direction. Part of this is that its impractical to develop a drive with the ability to do so in more than one. A ship can only go a single direction to begin with, and the power requirement to sustain two compressions would be more than is worth it.

Space folding and compression cannot also be used as an effective offensive weapon; however it can be used defensively. Ability to use space compression and folding begins to diminish around large planetary bodies where their natural gravity already has manipulated space. The Expletuns and Preservers are known to fold space around a planet or system to protect it, and effectively hid it, but anything smaller would be near impossible. String structure is seen to not only change around larger planetary (or larger) bodies, but it becomes more difficult to manipulate smaller strings as they are already under strong effects. It would take an enormous amount of effort to get past this barrier.

Because of this, all current FTL capable transportation systems can only bring a ship to within 1 to 5 hours of a planetary orbit (depending on planetary mass and sub-light drive velocities). Planets particularly close to their sun will experience further delay, as the stellar gravity well must also be accounted for. It should also be noted that space stations do not typically generate gravity wells, and a station that is not in orbit around a planet would not entail such a delay between arriving in system, and arriving at the station.

The effects of the folds and compressed space are slight gravitational. Due to the small size of the folds to begin with, there isn’t much if any. There is also the possibility that the nature of the folds can actually increase structural stability of a ship while within a compression or a compression corridor (where the ship actually ends up traveling).

Combat within a corridor, fold, or the compression as a whole would react according the physics which are being imposed on. So in most cases, they would act normally. Shooting torpedo or missile from within a corridor to leave through not an exit or entry point would result in the projectile having an immediate change in its spatial state and location. The projectile is most likely going to end up in one of the space folds and either ‘ripple’ out or ‘ripple’ right back into the corridor itself. So it’s a variable that should be taken into consideration, and it will not help the shooter in any way, and most likely will hinder his success of the shot.

This technology as used for Intergalactic space ship travel is not a precision technology. As is noted by side effects caused by large bodies of mass (planets, suns, etc) it is impossible for a ship to maintain a compression and come out from within the atmosphere of such a body of mass. It would disrupt the compression and make it impossible for the ship to create folds. Likewise, it’s also possible for some areas of space to be impossible to create spatial folds and achieve compression for a variety of reasons; natural and technologically imposed are both possibilities.

Subcell technology is also a direct new advancement as a result of achieving space folding and compression. Compression drives do not have the ability to achieving the same effect of Subcells. A subcell is a fold of physical space on which the effect is a pocket of physical space enclosed about. You get the effect of a cloak as the infinite endpoints of the mouth of the pocket are drawn so close that its difficult to detect, and impossible to detect what is inside. A separate mechanism achieves this on Subcell ships, which are unique, replace and occupy a great portion of the internal ships systems.